The Welcome Reception of RawMat2021 will be held on September, 5th, at Thea Pool Bar and Restaurant at Divani Caravel Hotel.

All Conference participants are invited. 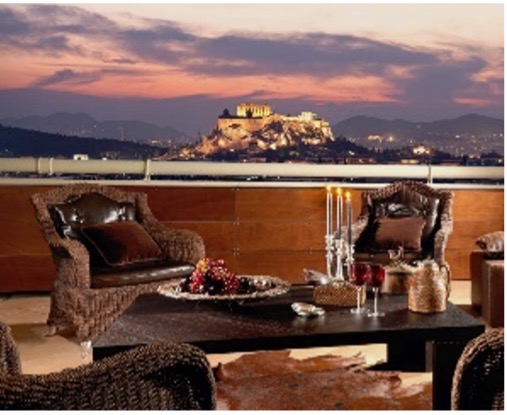 The Gala dinner of the conference will be held on September 7th, in the restaurant “Ioannis” Roof Garden of Royal Olympic Hotel. The restaurant stands on the 7th floor of the hotel with a fantastic view of the Temple of Zeus, the Acropolis, the National Gardens, the Marble Stadium, the Hadrian’s Arch, the Lycabettus Hill, the Parliament, the Old Observatory and the Herodion Theatre. The menu will include creative cuisine from a unique combination of forgotten traditional Greek recipes and modern conception in an impressive presentation.

To participate in the Gala dinner you need to register by submitting the Social events form.

Map for the Gala dinner 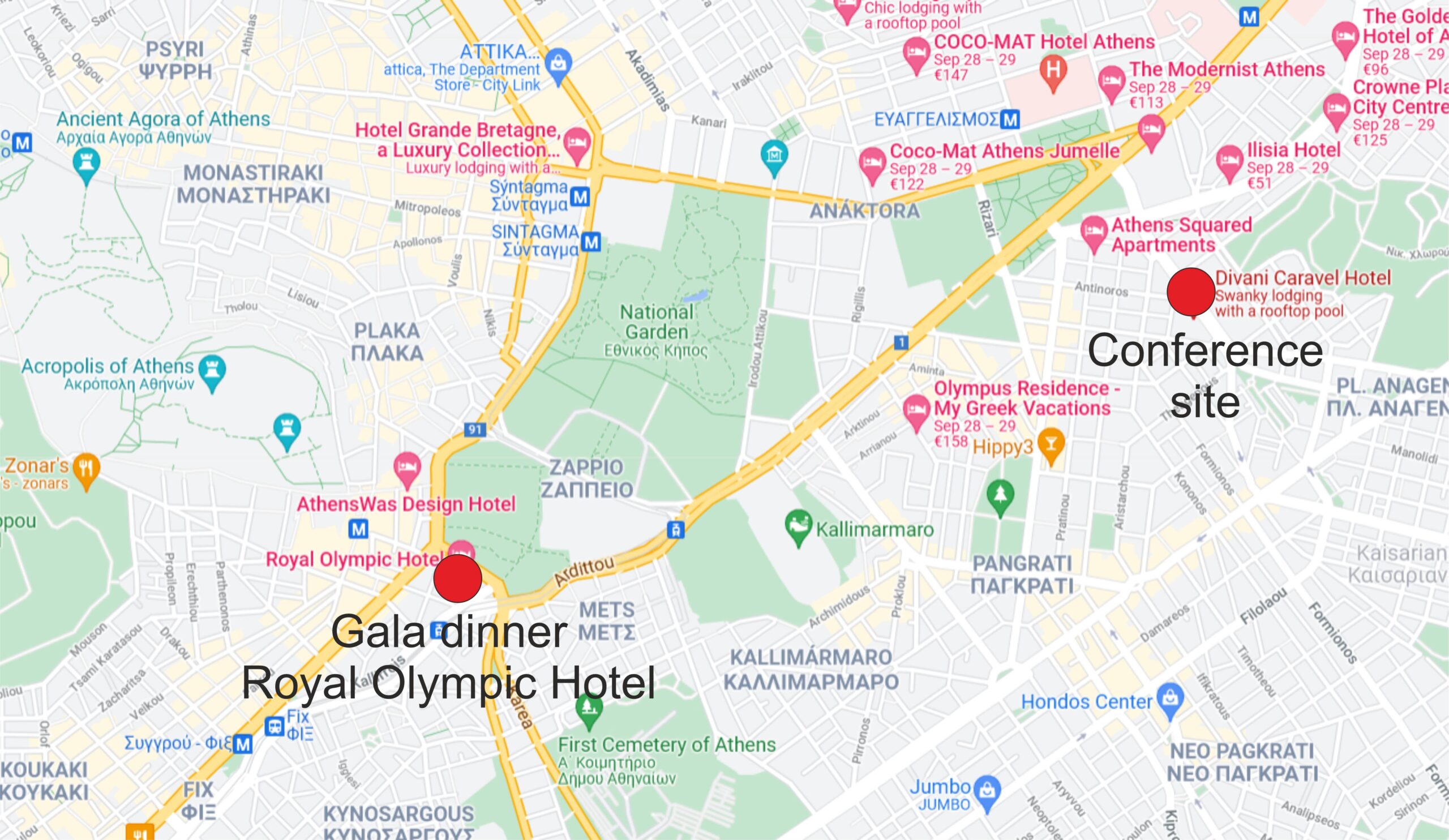 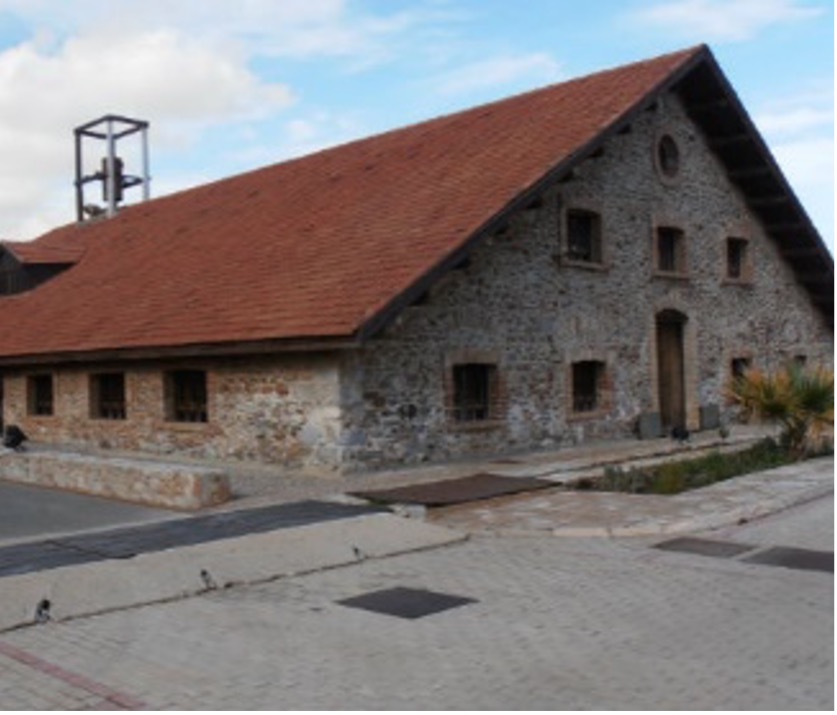 SHORT HISTORY OF MINING AND METALLURGY IN LAVRION

Lavrion’s history has been tightly bound to the history of Greece since prehistoric times. It is a unique historical city in Greece where mining and metallurgical activities (from as early as 3200 BC) mainly focusing on silver extraction, that was used to finance the formidable navy used to defeat the Persians in the naval battle of Salamis, and helped spawn the Athenian empire of the Classical era.

It is situated at the Southeast corner of Attica (60 km from Athens). The entire area of Lavreotiki is metalliferous. Up to 770 different minerals can be found in the Lavrion’s deposit. Worldwide, the Lavreotiki area is considered to be a natural museum of minerals. During antiquity the Athenians developed advanced mining and metallurgical techniques to mine the silver-containing Pb ores, either oxides or sulphides, and produce Ag. The lead content of the ores was in general quite low, it varied with the location and extracting Ag from Pb was considered to be one of the most difficult metallurgical tasks. The main use of Ag in those times was the production of coins, a symbol of welfare and power, and also production of jewellery and silverware. Apart from silver, important quantities of Pb were also produced during the 5th and 4th centuries BC. The decline of the activities began the 3rd century, and during 1st century all activities in the area were halted. The revival of the area began with the independence of Greece in the 19th century for the exploitation of ancient mining, mineral processing and metallurgical wastes initially and then of new ores for over 100 years until 1989 with the involvement of several different companies. All the mining and metallurgy related activities created serious environmental problems in Lavrion.  Huge volumes of mining and metallurgical wastes, containing variable amounts of heavy and toxic metals, such as Pb, Zn, Cd, As, have been generated. The city of Lavrion has been developed around and in some cases on top of these waste stockpiles.

Among the oldest ancient demes of Attica, Thorikos was one of the 12 settlements that, according to tradition, took part in the political unification under Athens by Theseus. Due to its proximity to the mines of Lavrion, Thorikos was the mining centre of Lavreotiki region. The site was inhabited from the Neolithic age (ca. 4500 BC) and without interruption until the 1st century BC. The excavations have brought to light part of the prehistoric settlement, as well as an extensive part of the historical deme, namely residential quarters, cemeteries, the theater, and the so-called "industrial quarter", along with ancient mines. Mine extraction in Thorikos dates back to around 3000 BC.

The most important monuments and architectural remains of the archaeological site are:

The Lavrion Technological Cultural Park (LTCP) was established in 1992 in the former French Company industrial area when all the mining and metallurgical activities ceased. It was realized with the initiative of the National Technical University of Athens (NTUA) aiming at hosting and promoting research and business activities, as well as protecting and giving prominence to our cultural heritage in a dynamic and sustainable way. LTCP’s facilities include industrial, laboratory and professional premises of high aesthetic and architectural value, which were built mostly during 1875-1940. The Park has been declared as a single listed monument by the Ministry of Culture. Today, most of the industrial buildings have been reconstructed, combining the prominence of their historic form with modern functionality, and LTCP is a unique monument of industrial archaeology and architecture. The realization of the Mining & Metallurgy Museum of Lavrion is in progress with the collaboration of the Ministry of Culture and NTUA, and when completed, it will be a unique museum of its kind at least in national range. Apart from the historical buildings, there are several other relevant interesting places to visit in LTCP including: 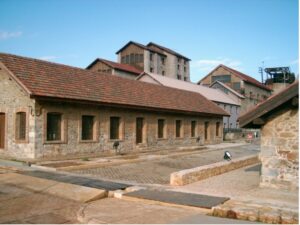 The site lies in the northernmost of a series of valleys that stretch to the great valley of Souriza and it was rendered accessible to visitors through a program financed by the European Union and executed by the Hellenic Ministry of Culture. The monuments of the site are:

Sophisticated methods for the separation of lead and silver containing heavy minerals from the light gangue material using rectangular washeries designed to collect, clean and recirculate almost the entire quantity of process water, with sealed with litharge mortars basins, ponds and cisterns, had been applied in Sourisa. In the west part there exists a big subterranean reservoir for drinking water, and on the slope at the NW a rectangular war tower, on top of a preexisting workshop. The tower is most probably connected to the effort of the Athenians to protect the area after the slaves of the mines escaped (413 BC) during the Peloponnesian War. In the east part, at the confluence with the great valley, extends a big cemetery plundered in the past.

“Sounion, the sacred point of the Athenians (Odyssey, c 278)”

It is one of the most visited sites in Greece known mainly for the white marble Temple of Poseidon and the magnificent view of the sunset. Homer testifies to the sacredness of the area at least from the 8th century BC. In the archaic period (7th- 6th centuries BC) the sanctuary was thriving, though lacking monumental arrangement. Plenty of votive objects were found buried in depositors, gathered there following the destruction of the sanctuary by the Persians in 480 BC. At the end of the archaic period construction of a monumental temple of limestone began, which was destroyed by the Persians before being completed. The temple was rebuilt on the foundations of the previous one around 444-440 BC. In the classical and Hellenistic times (5th - 2nd centuries BC) the sanctuary was frequently visited and a four-yearly festival was organized, officials sailing there in a sacred ship, as in the sanctuary on Delos Island. In later years, the sanctuary was abandoned and the temple gradually decayed.

The buildings of the archaeological site are the following: